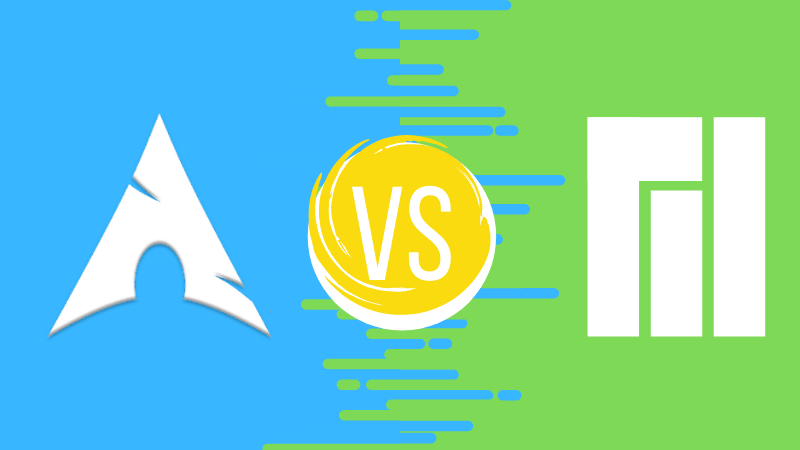 Manjaro or Arch Linux? If Manjaro is based on Arch, how is it different from Arch? Let’s take a closer look at how Arch and Manjaro differ in this article comparison.

Most beginner-friendly Linux distributions are based on Ubuntu. As Linux users get more experience, some try their hand at more “advanced distributions”, mostly in the “Arch domain”.

This Arch domain is dominated by two distributions: Arch Linux proper and Manjaro. There are other Arch-based Linux distributions out there, but none of them are as popular as these two.

If you’re confused between Arch and Manjaro, then this comparison should help you.

Manjaro and Arch Linux: How Different or Similar Are They?

I tried to compare these two distributions for different parameters. Keep in mind that I have not focused solely on the differences.

Both are rolling releases, but not the same type

Arch and Manjaro, such as Ubuntu or Fedora, don’t have “releases” every few months or years. Just update your system and you will always have the latest operating system and software packages. You don’t need to worry about updating the installed version like before.

If you plan on doing a fresh install at some point, remember that Manjaro and Arch update the installation image regularly. This is called an ISO update and ensures that newly installed systems do not have to install all the new system updates that have been available in the last few months.

But there is still a difference between the rolling version of Arch and Manjaro.

Manjaro maintains its own independent repositories, with the exception of the community-maintained Arch User Repository (AUR). These repos also contain software packages not provided by Arch. Popular software packages originally provided by the official Arch repositories will first be thoroughly tested (and, if necessary, fixed) before they are released, usually about two weeks after Arch, to their own stable repositories, updates are also added by Manjaro for public use.

The consequence of adapting this testing process is that Manjaro will never be as advanced as Arch. But then that makes Manjaro a little more stable than Arch and less vulnerable to hacking your system.

Both Arch and Manjaro come with a command line based package management tool called Pacman, which was written in C and uses tar to package applications. In other words, you can use the same pacman commands to manage packages in both distributions.

Besides Pacman, Manjaro also developed a GUI application called Pamac to easily install software on Manjaro. This makes Manjaro easier to use than Arch.

Note that you can also install Pamac from the AUR on Arch Linux, but this tool is an integral part of Manjaro.

Pamac isn’t the only GUI tool developed by the Manjaro team to help its users. Manjaro also has a dedicated tool for detecting hardware and suggesting drivers for it.

This hardware detection tool is so useful that it might be one of the main reasons why the community likes Manjaro. It’s insanely easy to discover / install / use or switch from one driver to another, making hardware compatibility a problem of the past.

Manjaro offers excellent support for GPU drivers. As we all know, Linux has had problems installing drivers (especially Nvidia) for years.

When you install Manjaro, it gives you the option to start by installing an open source graphics driver (free) or open source (not free). When you choose “non-free”, it automatically detects your graphics card and installs the most suitable driver for it, and therefore the graphics processor works out of the box.

Installing the graphics driver is easier even after installing Manjaro thanks to the hardware detection tool you saw in the previous section.

And if you have a system with an Nvidia Optimus (Hybrid GPU) card, it works great with Manjaro. You will get many options on how to make it work.

The Arch User Repository (AUR) is a community-driven repository for users of Arch-based Linux distributions. The AUR was created to organize and share new packages from the community, and to expedite the inclusion of popular packages in the community repository.

A large number of new packages that go into the official repositories start with the AUR. Users can contribute their own package assemblies (PKGBUILD and related files) to the AUR.

You can use the AUR in both Arch and Manjaro.

You can use almost any desktop environment on any Linux distribution. Arch and Manjaro are no exception.

However, a special edition or version of the desktop makes it easier for users to seamlessly use the specified desktop environments.

The standard Arch ISO does not include a desktop environment. For example, if you want to install KDE on Arch Linux, you will need to either download and install it during the Arch Linux installation or after that.

Manjaro, on the other hand, provides various ISOs for desktop environments such as Xfce, KDE, and GNOME. The Manjaro community also maintains ISOs for MATE, Cinnamon, LXDE, LXQt, OpenBox, and more.

Manjaro is based on Arch Linux and is compatible with Arch, but not Arch. It’s not even a pre-configured version of Arch with a graphical installer. Arch doesn’t have the usual comforts out of the box, so most people prefer something simpler. Manjaro offers an easy login, but helps you become a power user.

Both Arch and Manjaro have their own wiki pages and support forums to help their users.

While Manjaro has a decent wiki for documentation, the Arch wiki is in a different league. You can find detailed information on every aspect of Arch Linux at the Arch wiki.

The key difference is that Arch is aimed at self-directed users who are willing to read the documentation and solve their own problems.

On the other hand, Manjaro is aimed at Linux users who do not have this experience or do not want to spend time building an operating system.

Some people often say that Manjaro is for those who cannot install Arch. But I think that this is not true. Not everyone wants to set up Arch from scratch or are short on time.

Manjaro is definitely a beast, but a beast is very different from Arch. Fast, powerful, and always up-to-date, Manjaro delivers all the benefits of the Arch operating system, but with a particular focus on stability, usability, and accessibility for novice and experienced users.

Manjaro doesn’t go as far in its minimalism as Arch Linux. With Arch, you start with a clean slate and manually tweak each parameter. When the default Arch installation is complete, you will have a running Linux instance on the command line. Want a graphical desktop environment? Go ahead – there are plenty to choose from. Pick one, install and configure it. You will learn so much by doing this, especially if you are new to Linux. You will get an excellent understanding of how the system works and why everything is installed this way.

I hope you now have a better understanding of Arch and Manjaro. You understand how similar and different they are at the same time.

I expressed my opinion. Feel free to share yours in the comments section. Do you see the difference between Arch and Manjaro? Which distribution is best for you?

0 arch manjaro review
Like this post? Please share to your friends:
Related articles
Reviews 0
Deepin is one of the nicest Linux distributions out there, based on the stable
Reviews 0
IPTV is the delivery of media content, video or live broadcast over an IP

Reviews 0
GNOME 3 was introduced in 2011, and the GNOME shell generated both positive and

For beginner 0
Various Linux software was distributed only as source code many years ago. We had

MacBuntu Budgie…
3 days ago by admin
Download my assembly from the ...

You can help the project develop by donating any amount.